Multiple award-winning rapper Elorm Adagbla popularly known in the showbiz cirlce as EL has released his much anticipated sophomore the BAR 6.

EL after some time was a off the music scene but now is back after releasing his WAVs album and now with a new groove the BAR 6.

The OV Nation frontman scheduled the release of his BAR 6 on the 12th November 2021 but for reasons best known to him he released it put of the blue today, 6th November 2021.

BAR 6 is a preceding masterpiece of EL’s Best African Rapper project since 2015 where he released BAR 1.

BAR 6 is a fifteen track album which features top notch rappers like Joey B, Lyrical Joe, Tulenkey, Yung Pabi and many others. 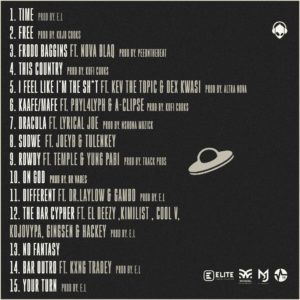