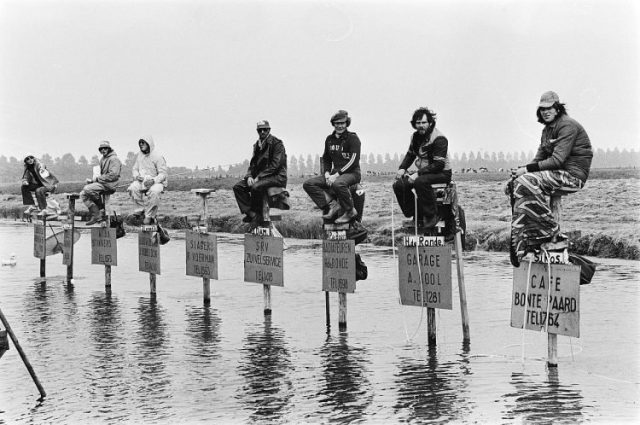 They say sports are good for your health, but they probably don’t mean the Dutch sport of Paalzitten or Pole Sitting, which sees competitors literally sitting on wooden poles for dozens of hours, until they surrender to either numbness or boredom.

No one knows exactly how Paalzitten came to be, but some sources claim that it originated in the Dutch province of Friesland, where locals tried to stave boredom by inventing sports that involved objects used in daily life, like wooden poles. It’s not clear exactly why someone thought sitting on a wooden pole just waiting for the other guys to descend first was an antidote to boredom, but somehow the sport of Paalzitten caught on and despite almost going extinct at one point, it’s still occasionally practiced in the Netherlands.

Paalzitten poles are usually placed in water, a few meters from each other, so that if the competitors either doze off or get numb enough to fall off, thy don’t get injured. Modern poles are usually equipped with a sit and backrest so the competitors don’t get too uncomfortable, and the rules allow for toilet breaks every few hours. It wasn’t always this lax though. In the early 1970’s, participants were not allowed to leave their poles at all. Instead, a huge canvas was hun around them as they relieved themselves in wooden buckets. Even under these strict conditions, during the 1972 Paalzitten world championship, someone managed to sit on a wooden pole for 92 consecutive hours.

Paalzitten is still around today, but since it’s not the most exciting sport to watch, it is considered more of a tourist attraction than a spectator sport. For obvious reasons, not many people are too eager to sit around for days on end just too see who the last pole sitter is.

This unsually boring sport inspired one of the worst films n Dutch cinematography. Called “Sportsman of the Century“, it tells the story of an avid Paalzitten practitioner training to break the fictional record of 250 days sitting on a pole since early childhood. He even fathers a baby while sitting on the pole, and proceeds to lose his love interest after refusing to cancel his participation in a Paalzitten

competition to help her. He ultimately dies as an old man, sitting on a pole, obviously. In 2006, the film was nominated for two Golden Onions, in the categories Worst Film and Worst Director.