The KNUST Students’ Parliament House has won the campus group of the year award at this year’s edition of the National Students’ Awards held in Accra yesterday.

The Students’ Parliament House beat six other nominated groups from various universities across the country to win this award. 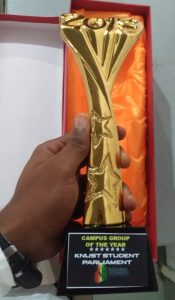 The KNUST Students’ Parliament House, a member of the Ghana National Students’ Parliament formed under the auspices of the Public Affairs Directorate of the Parliament of Ghana as a non-governmental, non-profitable and non-partisan Student-oriented pressure has been in operation for the past thirteen years.

The house is noted for its advocacy, the recent been the vigilante groups it threatened to demonstrate against after petitioning the government.

It also recently petitioned the government to celebrate Osaagyefo Dr. Kwame Nkrumah by developing his birthplace which has yielded a positive result from the Government.