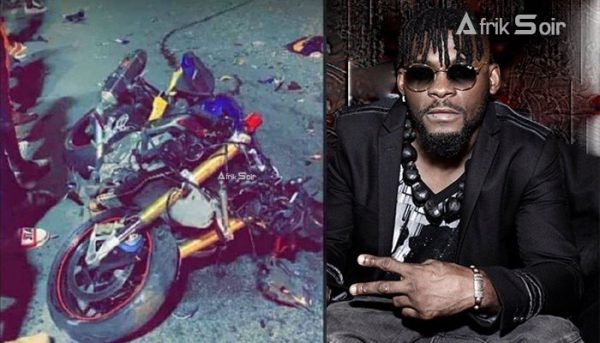 The ‘coupe-décalé’ star died at a hospital in Abidjan due to the severe injuries he sustained during the accident.

Reports say the popular Ivorian DJ’s motorbike was hit by a car driven by a radio presenter/journalist from Radio Côte d’Ivoire.

DJ Arafat lost consciousness immediately his bike was hit by the moving car and was quickly rushed to the hospital but could not survive the severe injuries he sustained from the accident as he was pronounced dead yesterday.

A reliable state broadcaster RTI first confirmed the death of the renowned African DJ on Monday 12th August 2019 on Twitter.

“Death of artist DJ Arafat… today at 8 am as a result of a road accident overnight,” The tweet read.

The news of his death was also confirmed by Nigerian singer Davido after he posted a photo of himself and DJ Arafat on his social media handle expressing his condolence.

“RIP YOROBO, I LOVE YOU”

The report about the death of DJ Arafat has shocked many music enthusiasts as well as other entertainment personalities across Africa and globally.

However, after the announcement of the demise of the renowned disc jockey, some people quizzed ‘Who is DJ Arafat’?

According to information gathered from Wikipedia, DJ Arafat is an ex-disc jockey in “Shangaï” on Princess Street (Rue Princesse, located in Yopougon, Ivory Coast), was an Ivorian DJ and singer,[1] who makes music of the Coupé-Décalé genre.

He is the son of Tina Glamour, also an artist, and deceased musician Houon Pierre.

DJ Arafat was considered as one of the most renowned African entertainers in Francophone countries and was known worldwide.

DJ Arafat is one of the first in his country Ivory Coast to obtain 1 million views in less than a day on his song ‘Moto Moto’.

He died on August 12, 2019, in a fatal motorcycle accident in Abidjan, Ivory Coast.