Award-winning Dancehall artiste Stonebwoy has been a subject to ridicule and critism as Twitter goes haywire over his 1million views on YouTube  in just a day with his new song.

The song titled Blessing featured American rapper Vic Mensa which was released hours ago and has caught many views which happens to be a record in our industry and causing a stir on social media.

According to social media users and as far as they are concerned, the number of views people get on YouTube must have a significant effect on the number of comments from the viewers thereby if Stonebwoy’s figure does not correlate then he is using inorganic subscribers. 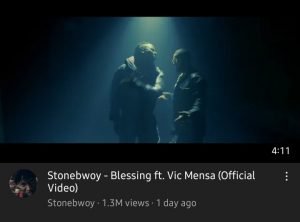 Most of his fan base have also supported him in all forms because he is a good asset to the industry therefore having this number of views isnt something difficult for people to understand or perhaps throw shade at him. 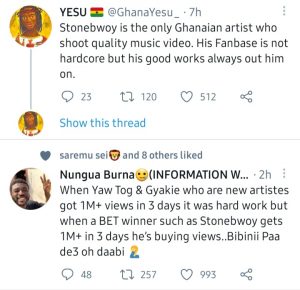 Here are some of the tweets captured from social media users with respect to why Stonebwoy’s 1million views on YouTube is inorganic.