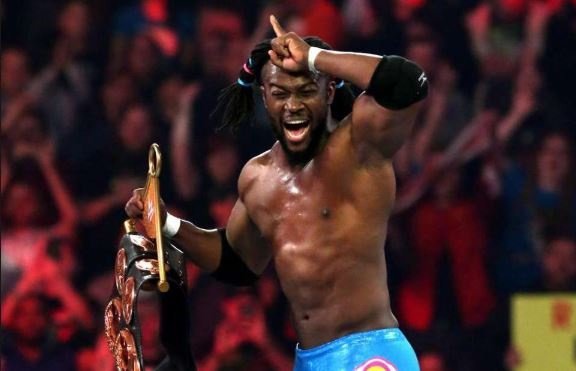 Reigning WWE World Champion Kofi Sarkodie-Mensah, popularly known as ‘Kofi Kingston’ is currently in town and is already getting along with the stars as he has been sighted in a video with Bhim Nation President, Stonebwoy.

In the video, the 37-year old Ghanaian-American wrestler who defeated Daniel Bryan in April’s Wrestlemania 35 event to become the first African-American to pick up the sports entertainment’s most coveted crown was seen having a chat with Stonebwoy.

Kofi Kingston who has been wrestling for the past 11 years and he became the second African American (following Dwayne “The Rock” Johnson) and first native to hold WWE’s signature title since it debuted in 1963 returned to Ghana this week after his historic win.

Kofi paid a courtesy call on the President of Ghana H.E Nana Akufo-Addo at the Jubilee House Yesterday May 31, to present his world title belt to the presidency.

According to him, he considers this “Year of Return” as a unique opportunity for him to make a historic visit to Ghana at the height of his wrestling career.

Watch the video of Kofi Kingston and Stonebwoy below:

Stonebwoy meet up with Kofi Kingston